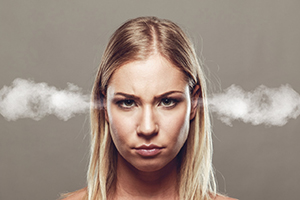 In Ireland, people seem to be able to get into a temper for little or no reason, from Malin Head to Mizen Head and from Dublin to Doolin. When things aren’t going to plan – the car won’t start, there is traffic being held up because a tractor is on the road, the children are whining or if something just won’t work. The blood boils and we let out a big “Fuselage”, “Botox” or “Gesture”. While this elevates a bit of stress and we feel better afterwards, it creates a big problem down the line.

The problem is that we will have to give an account for every idle word we speak – Matthew 12:36. There is a law which says you shall not take the name of the Lord your God in vain, for the Lord will not hold him guiltless who takes His name in vain – Exodus 20:7. When we curse, we blaspheme the name of God.

I hear you ask what does it mean to blaspheme? The Oxford English dictionary defines it as this: “The action or offense of speaking sacrilegiously about God or sacred things; profane talk”. This means we have offended Gods moral standard and we will be judged for it – Romans 3:23. The Punishment is to be thrown into outer darkness where there will be weeping and gnashing of teeth – Matthew 22:13.

Picture someone who has been convicted of raping someone very close to you – a sister, daughter or your wife. You would want to see that person thrown behind bars and never let out and see the keys melted. You would be outraged, demanding justice and rightly so. It is the same for God. He can’t tolerate sin in his presence because he is holy and just. He wants to see the guilty punished for what they have done. It doesn’t matter whether it is murder or cursing, you break one commandment you have broken them all and are judged as a transgressor – Go beyond the limits of (what is morally, socially, or legally acceptable) – Oxford English Dictionary.

But he has a dilemma. On the one hand he wants to see the guilty punished but on the other hand he loves you and doesn’t want you to perish. He cares for you and wants the best for you. This is where Jesus Christ steps in. When we were still without strength, in due time Christ died for the ungodly – Romans 5:6 .This Means that Christ took all of the punishment on the Cross for all your sin (Christ also suffered once for sins, the just for the unjust, that He might bring us to God) – 1 Peter 3:18.

This doesn’t mean you get a “get out of jail free” card. Now that he has paid for your sin, there are a few things you need to do, it’s like your parents giving you a present but it isn’t yours until you receive it: