We are all descended from one man and woman, Adam and Eve, contrary to popular belief. We have inherited what’s known as a “sin nature”. This means that we instinctively do what we know is wrong. In the beginning Adam & Eve were perfect in the sight of God – Yahweh or Jehovah (Not to be confused with the Jehovah witnesses). Then they fell from their privileged position, because like bold children, they did what they were told not to do. They disobeyed God by eating the fruit from the tree of the knowledge of good and evil. In so doing, they drove a wedge of mistrust between themselves and God, consigning both themselves and their descendants (You and me) to death. First spiritual death – they lost their close relationship to God and then afterwards, physical death.

We have this sin nature passed down to us from Adam. It is a big problem for us because it makes us blind to the things of God. As we are, we can’t please God in any way because he is perfect, holy and just. He can’t let the sins that we commit against him and others slide, he must punish sin and the just reward for sin is death. During life, we have no natural communications with him at all. When we die, we will be separated from him for ever and will be tormented forever which is the just reward for our sin. 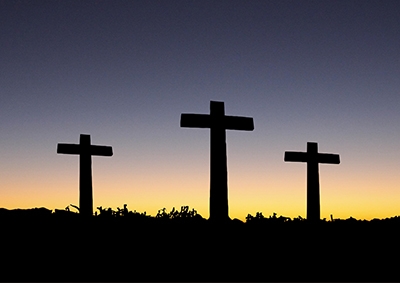 At just the right time, when we were still powerless, Christ died for the ungodly. Very rarely will anyone die for a righteous person, though for a good person someone might possibly dare to die. But God demonstrates his own love for us in this: While we were still sinners, Christ died for us (Romans 5:6 – 8). We are sinners; we are not even good in the sight of God and are naturally at odds with God. For whoever keeps the whole law and yet stumbles at just one point is guilty of breaking all of it. For he who said, “You shall not commit adultery,” also said, “You shall not murder.” If you do not commit adultery but do commit murder, you have become a lawbreaker (James 2:10 – 11). In Genesis God looked at what he made and it was good (Gen 1:21) and then we messed it up.

Before Christ came on the scene, the Jews had a feast called The Passover. It was to commemorate the time when they were slaves in Egypt. At that time The Lord struck the first born of both animals and people dead, but he “Passed Over” the Hebrew households because they had put the blood of a lamb on the top and sides of their front doors – see Exodus 12. It points forward to Christ’s substitutionary work on the cross. He took the penalty due for OUR Sins because the wages of sin is death, but the gift of God is eternal life in Christ Jesus our Lord.

When the nation of Israel were wandering through the wilderness, they grumbled and complained against Moses and God, even though they had seen God perform great miracles by the hand of Moses. Examples of these include the parting of the Red Sea and the manna falling from heaven. The Lord was angry with them and sent in venomous snakes among the people and many of them died (Numbers 21:4 – 9). God told Moses to make a bronze snake and put it up on a pole so anyone who was bitten could look at it and live. In the same way, we are to look to Christ Jesus, put our trust in him and him alone to get us to heaven and turn from our sins and follow him.

Blessed is he whose transgression is forgiven, Whose sin is covered.
Blessed is the man to whom the Lord does not impute iniquity,
And in whose spirit there is no deceit – Psalm 32:1 – 2.