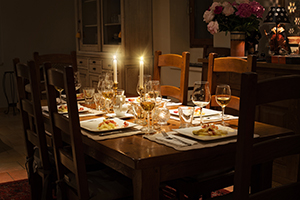 At Christmas, It is so easy to get caught up with all the preparations that need to be made. You see the need to buy presents, get the turkey, the ham and all the related trimmings, which you think you need to have a “perfect” celebration. But what are you celebrating? Why all the fuss? Why are you so tired running around from shop to shop for what you’re being told are reasonable provisions? You also might be attending the end of year parties, school plays etc. So that when the day actually arrives you feel too tired and worn out to enjoy it. And of course the very next day the rat race begins once again with getting what advertisers claim are “the bargains which are not to be missed”, which, only a few days or weeks ago cost you double.

Have we lost something? Are you really happy in all your rush to get things ready and your rush to pack things up again until next year? Have you ever stopped to think seriously about those school plays in which your children, or children related to you have been performing? What are they about? Why does it seem to be so important?

In order to understand this we first need to go back to the beginning – not millions or billions of years ago but only about six thousand years ago. When we were first made, we were perfect in every respect and regard. Our ancestors were happy in their own skin and more importantly, they were perfect in the sight of the one who made them. He gave them one command and they broke that one command – in paradise, where environmental conditions couldn’t have been better.

There are people today who seem to think that all our problems are down to our environment and if only our environment were as it should be, then we would flourish as we were meant to. They say that people commit crimes because they are ignorant and uneducated and that if we expose them to education and culture and instruct them in the way they should go then they would be ok. They say people need to be “rehabilitated”, not realising that someone could serve 50 years for murdering in cold blood, could be released and the next day go out and do the same thing again. They think that the problem is in the mind when in fact it is the heart of man which is rotten to the core.

In the world today, people seem to think that God doesn’t exist or if he does exist then he is passively involved or someone who you could turn to in a desperate situation as a psychological crutch and so you keep him at arms length. They make up all sorts of fairy tales to explain how the world came into being and they also claim that things are gradually getting better without a single shred of evidence to prove it – teaching as fact the ideas of psychologically unstable and rebellious men who being past feeling have given themselves over unto lasciviousness, to work all uncleanness with greediness.

The fact is that God is intimately involved in the world he created. If you painted a masterpiece or built your house with your own two hands from start to finish would you then let it be hit by a wrecking ball or blown to bits with dynamite? No, you would care for it and look after it. If it was a painting, you would put it into a place of prominence for all to see. It is the same with God, The Lord of Hosts.

Throughout the bible – the inspired word of the one true living God, we see just how he cares for us and works for our best. But equally if we ignore him and continually spurn his warnings and mock his long suffering and patience with us, the day will come like a bolt out of the blue when he will judge us for all our wrongdoing and wicked ways in which no amount of good works or deeds can compensate.

Now the multitude of those who believed were of one heart and one soul; neither did anyone say that any of the things he possessed was his own, but they had all things in common. And with great power the apostles gave witness to the resurrection of the Lord Jesus. And great grace was upon them all. Nor was there anyone among them who lacked; for all who were possessors of lands or houses sold them, and brought the proceeds of the things that were sold, and laid them at the apostles’ feet; and they distributed to each as anyone had need.

And Joses, who was also named Barnabas by the apostles (which is translated Son of Encouragement), a Levite of the country of Cyprus, having land, sold it, and brought the money and laid it at the apostles’ feet.

But a certain man named Ananias, with Sapphira his wife, sold a possession. And he kept back part of the proceeds, his wife also being aware of it, and brought a certain part and laid it at the apostles’ feet. But Peter said, “Ananias, why has Satan filled your heart to lie to the Holy Spirit and keep back part of the price of the land for yourself? While it remained, was it not your own? And after it was sold, was it not in your own control? Why have you conceived this thing in your heart? You have not lied to men but to God.”

Then Ananias, hearing these words, fell down and breathed his last. So great fear came upon all those who heard these things. And the young men arose and wrapped him up, carried him out, and buried him.

Now it was about three hours later when his wife came in, not knowing what had happened. And Peter answered her, “Tell me whether you sold the land for so much?”

Then Peter said to her, “How is it that you have agreed together to test the Spirit of the Lord? Look, the feet of those who have buried your husband are at the door, and they will carry you out.” Then immediately she fell down at his feet and breathed her last. And the young men came in and found her dead, and carrying her out, buried her by her husband. So great fear came upon all the church and upon all who heard these things.

There were members of the early church who wanted to help one another. There was no compulsion or command placed on anyone to sell their possessions and put the proceeds into a common pot.

The main Problem with Ananias and Sapphira is that they had pledged to give the full price of what they received for their land but kept back part of it for themselves. They thought they were being clever and that no one would know. Peter said that they didn’t need to sell their possession if they didn’t want to and even when they did sell it; there was no compulsion or command or need to give away the proceeds if they didn’t want to.

They conspired, the two of them deliberately in this fraud, being dishonest – Hypocrites.

They saw others doing just that and they wanted to be seen to be doing the same. They wanted to be with the “in” crowd. By doing this, they brought this judgment on themselves. Very early in the newly formed church, The Lord was clearly expressing that he would NOT tolerate fraud of any kind (Proverbs 11:1). They forgot the spiritual realm which is divided in two: God (Father, Son and The Holy Spirit) and his adversary Satan (The devil/lucifer). The church was not and is not like any social society, club or association. We are accountable to The Lord who is no respecter of persons and from whom nothing can be hidden.